It’s official folks, Avengers: Endgame has surpassed Avatar as the highest-grossing movie of all time, raking in $2,790,216,193 at the global box office as of 21 July but, it would appear that Marvel Studios has no intention of slowing down its phenomenal pace.

After we consider that during Marvel’s Phase 4 announcement at this year’s San Diego Comic-Con, it was proclaimed that a further thirteen comic book projects are in the pipeline (a range of movies and Disney Plus television series), you’d be forgiven for feeling a touch of superhero fatigue. Black Widow, The Falcon and the Winter Soldier, The Eternals, Shang-Chi and the Legend of the Ten Rings, Wandavision, Loki, Doctor Strange in the Multiverse of Madness, What If?, Hawkeye, Thor: Love and Thunder, Blade, Black Panther 2, Captain Marvel 2 and Guardians of the Galaxy Vol 3 all have been declared to be in various stages of production.

As exciting as all of this may be for Marvel diehards, we can’t help but wonder if there may be a more adult-friendly alternative that we can sink our teeth into once the kids have been tucked away safely into their beds. Well, Amazon Prime may have the answer with their upcoming superhero-bashing black comedy series, The Boys.

So, What’s it about?

Based on Garth Ennis and Darick Robertson’s cult comic book series of the same name, The Boys operates as a darker alternative to the prescribed superhero canon. Within this universe, the ‘super-abled’ inhabit the cultural consciousness to such a degree, that they are utilised to advertise energy drinks. These ‘heroes’ are ubiquitous within society and highly commercialised.

The most pervasive of the bunch are ‘The Seven,’ a pastiche of DC’s The Justice League who, represent a group of familiar archetypes: a speedster, a patriot and a water-based ‘King of the Sea’ amongst others.

The Seven are played by Antony Starr as Homelander, Erin Moriarty as Annie January (otherwise known as Starlight), Dominique McElligott as Queen Maeve, Jessie Usher as A-Train, Chace Crawford as The Deep and Nathan Mitchell as Black Noir. 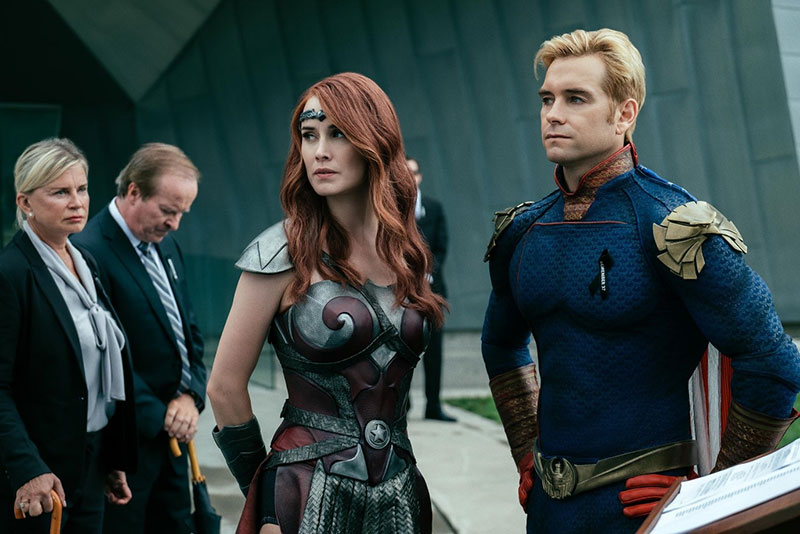 After a series of rather gruesome events take place involving the Seven, it is revealed that these so called ‘superheroes’ are not so wonderful after all and in fact, possess their own vices and shortcomings including (but not limited to): Sexual debauchery, drug-taking and narcissism. None of this misses the careful observations of Karl Urban’s (who you may remember as Eomer from the Lord of the Rings Trilogy) character, the Englishman Billy Butcher, the leader of an anti-superhero vigilante group known as The Boys.

Backed by the CIA, The Boys undertake covert ops to police the less savoury activities of the superheroes and if they fall out of line, blackmail, beat up and even kill them. Butcher enlists our main protagonist, the electronics salesman, Hughie (played by Jack Quaid, Marvel from The Hunger Games) after he loses faith in the Seven when his girlfriend explodes as a result of superhero recklessness. He joins Billy Butcher, as well as, Mother’s Milk (played by Laz Alonso, Southland, L.A.’s Finest), Frenchie (Tomer Kapon, When Heroes Fly, Hostages) and Female (Karen Fukuhara, Suicide Squad). The series reaches fever pitch as the narrative follows the violent activities of the The Boys while they attempt to outfox some pretty formidable superhero foes and the ominous Vought International corporation, headed by Elizabeth Shue’s Madelyn Stillwell (The Karate Kid, Back to the Future, Cocktail).

The show is visceral, dark and violent, with a twist of gleeful, jet-black humour to boot. The plot of the first episode follows Hughie after he attempts to sue A-Train after the death of his girlfriend. A-Train’s lawyers offer $45,000 dollars as compensation and hush money, but Hughie starts suffering from panic attacks. Meanwhile, the super-abled Annie January auditions for the Seven (following the retirement of ‘The Lamplighter) as ’Starlight,’ a light-emitting superhero with a desire for honest justice. 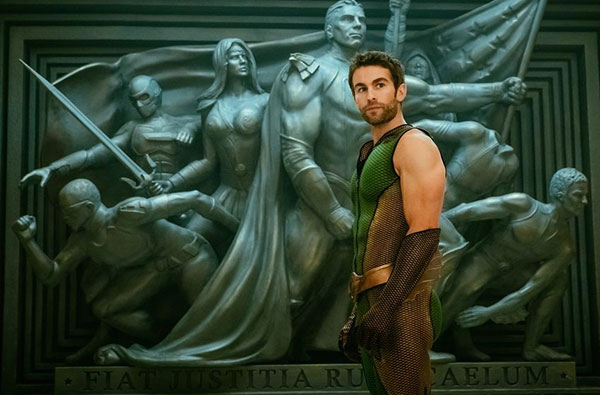 After being coerced by The Deep, Annie becomes disillusioned. Now that Hughie has been approached by Billy Butcher, he learns that A-Train has been mocking him and his girlfriend.

So now, him and the rest of The Boys begin to enact a brutal plan of vengeance.

The Boys: Developers and Producers

The show was developed by Eric Kripke, Evan Goldberg and Seth Rogen who, if you remember also developed AMC’s Preacher (another violent comic adaptation based on the work of Garth Ennis). Being fans of the source material, Goldberg and Rogen have attempted to maintain a faithful adaptation of The Boys and have chosen to retain the gritty, expletive-laden tone of the comic.

Seth Rogen and Evan Goldberg have been close collaborators for many years, having worked together on a range of comedy projects such as: This is the End, The Interview, Singularity, Superbad, Pineapple Express, Knocked Up and Funny People. Further executive producers joining forces with Kripke, Rogen and Goldberg are James Weaver, Neal H. Moritz, Pavun Shetty, Ori Marmur, Ken Levin and Jason Netter.

Promisingly, the show has been awarded a second season on Amazon Prime Video before the premiere of the first episode even aired.

The comic book series has been described as an ‘allegory about absolute power corrupting absolutely’ by Darick Robertson. Despite feeling like a condemnation of superheroes, it is clear that the creators of The Boys are fans of the genre themselves.

Although, the comic was briefly cancelled after its sixth issue in 2007 after DC Comics reportedly became uncomfortable with the anti-superhero tone of the work. 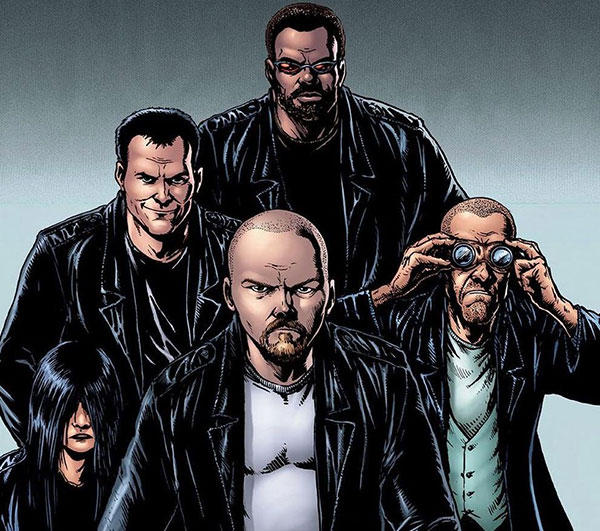 The Boys was initially published by Wildstorm, which is an imprint of DC, meaning that DC controlled the production of the comic. Eventually, DC would cancel the run (we can only assume that the work was too dark, even for them) and The Boys had to begin searching for a new home. Luckily, it was picked up by Nick Barrucci’s Dynamite Entertainment (an imprint of Dynamic Forces), who are mostly known for their comic adaptations of established film franchises. These include Army of Darkness, Terminator and Robocop but also produce comic versions of public domain literary works such as Dracula, Zorro, Tarzan, Alice in Wonderland and John Carter of Mars. 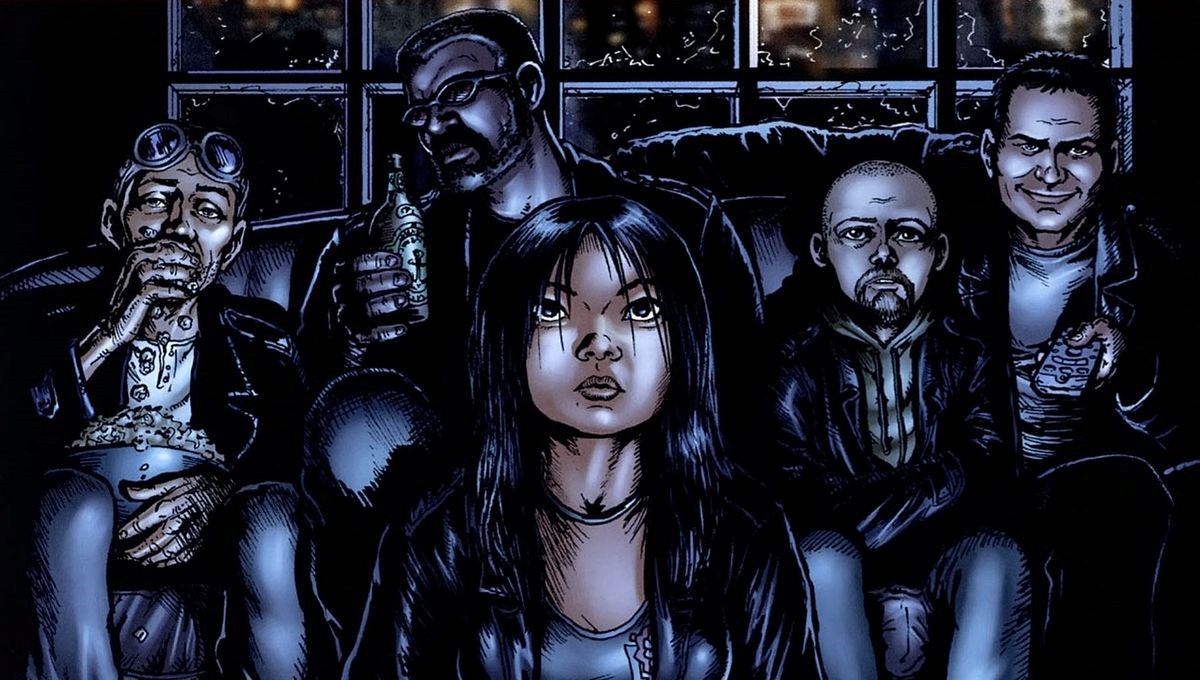 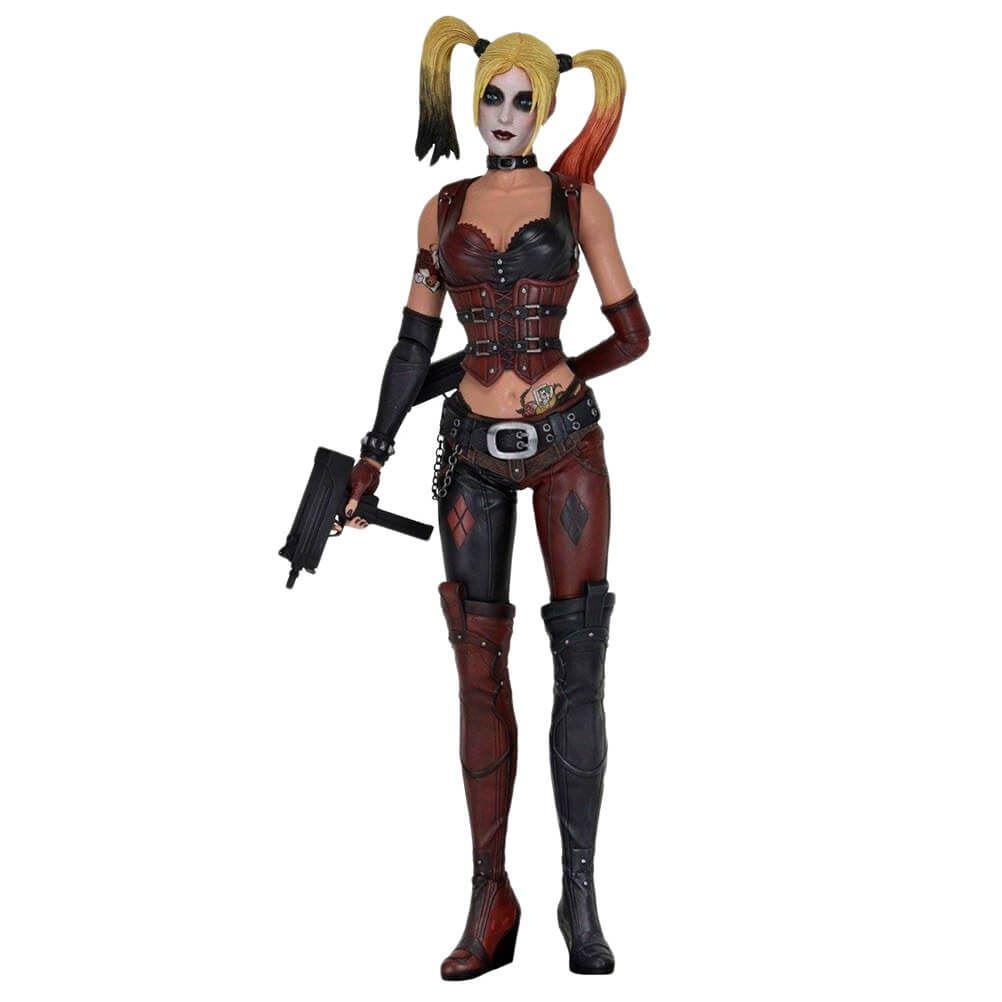 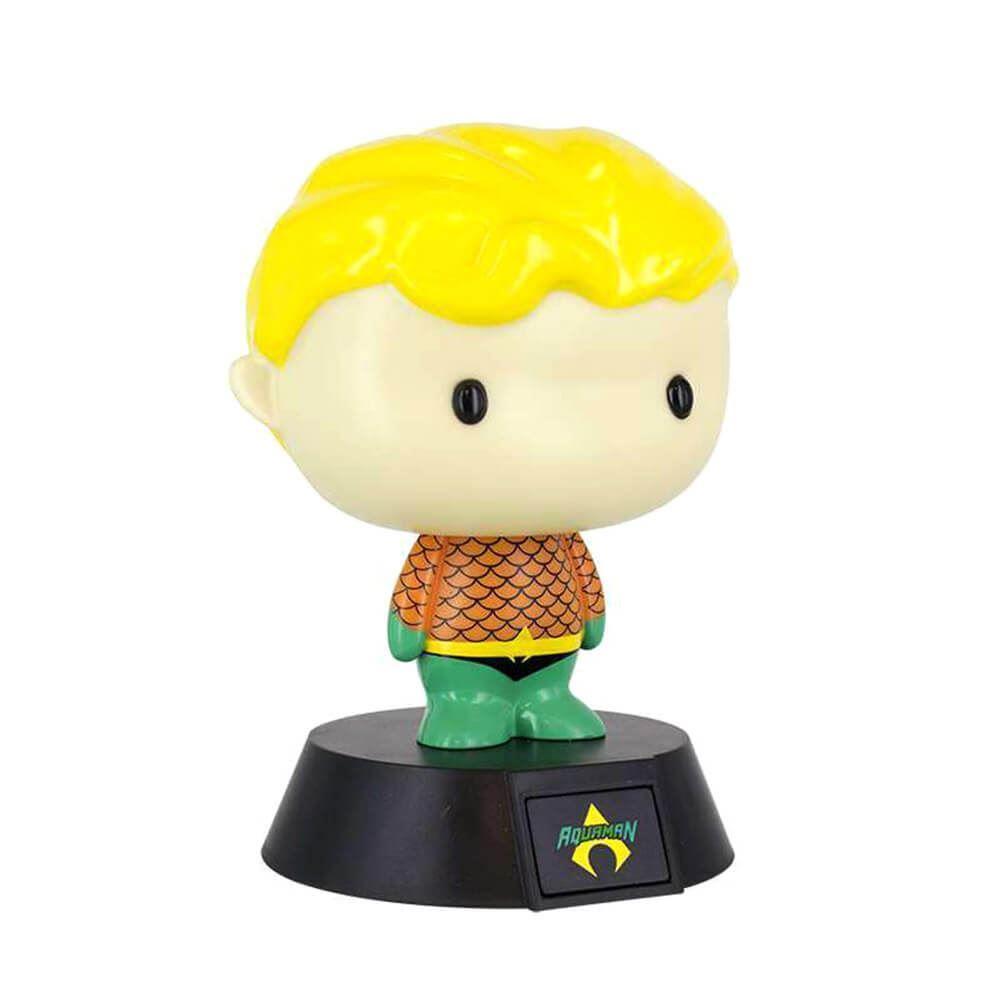 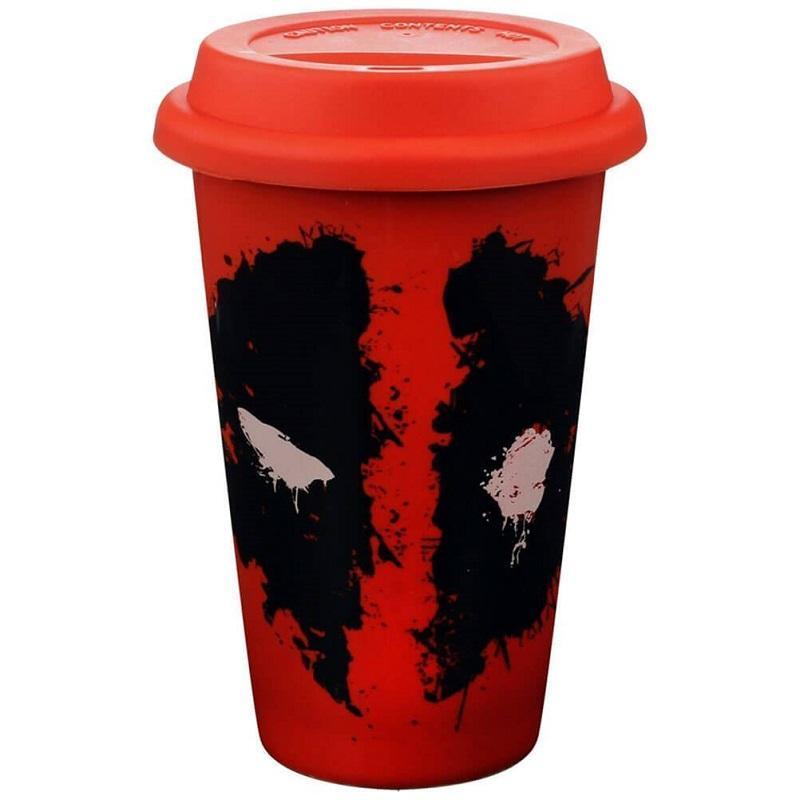 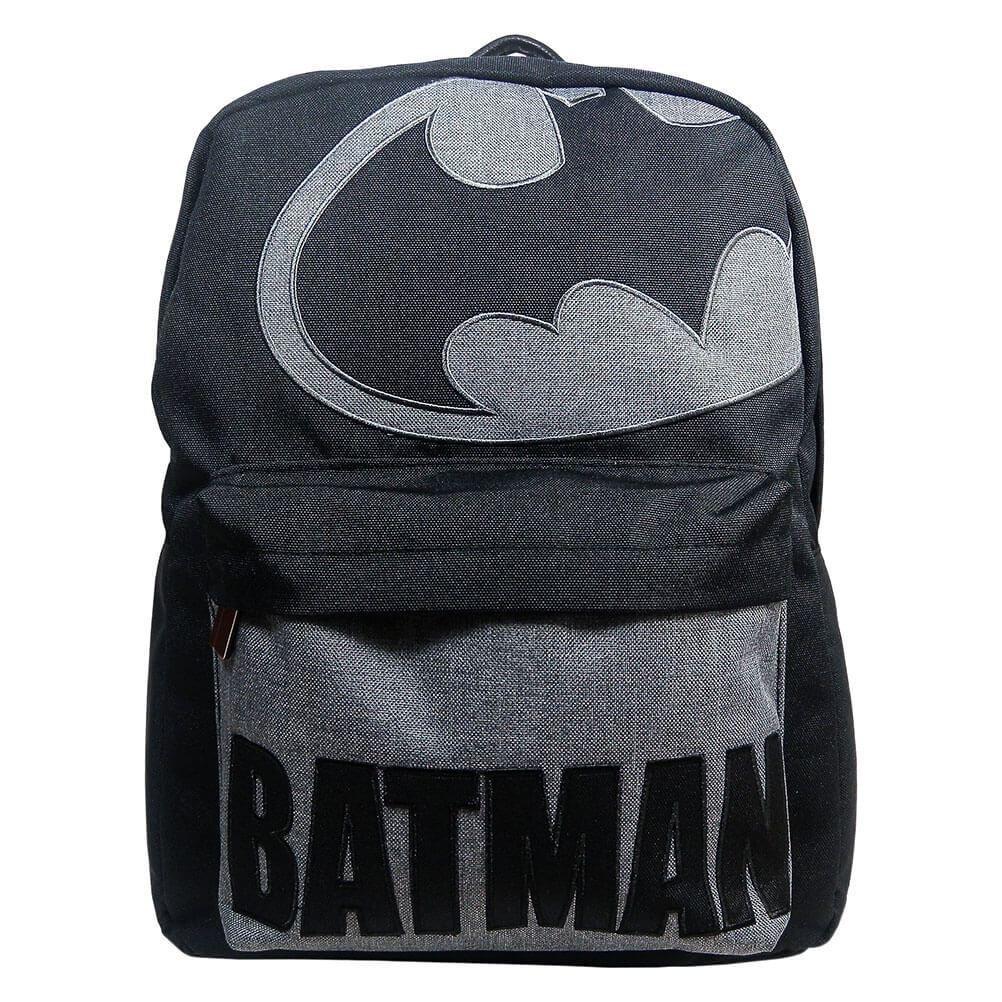 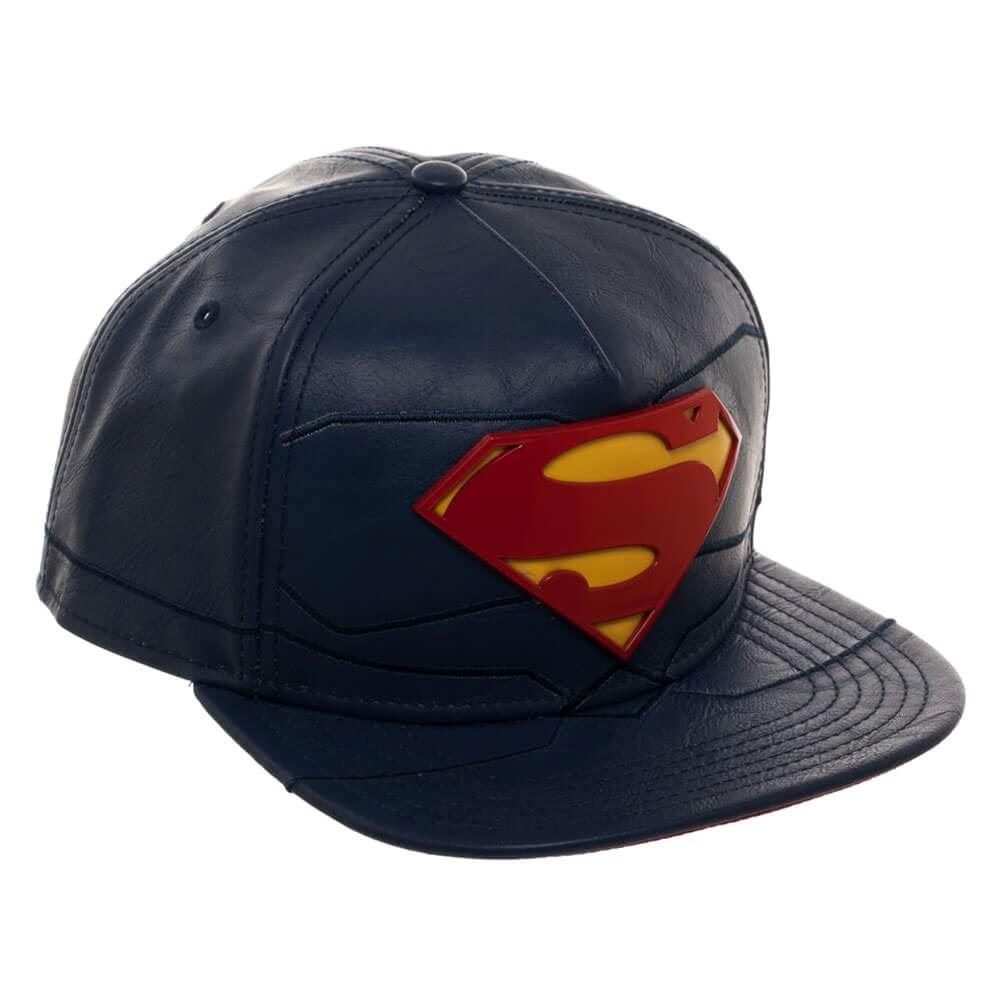 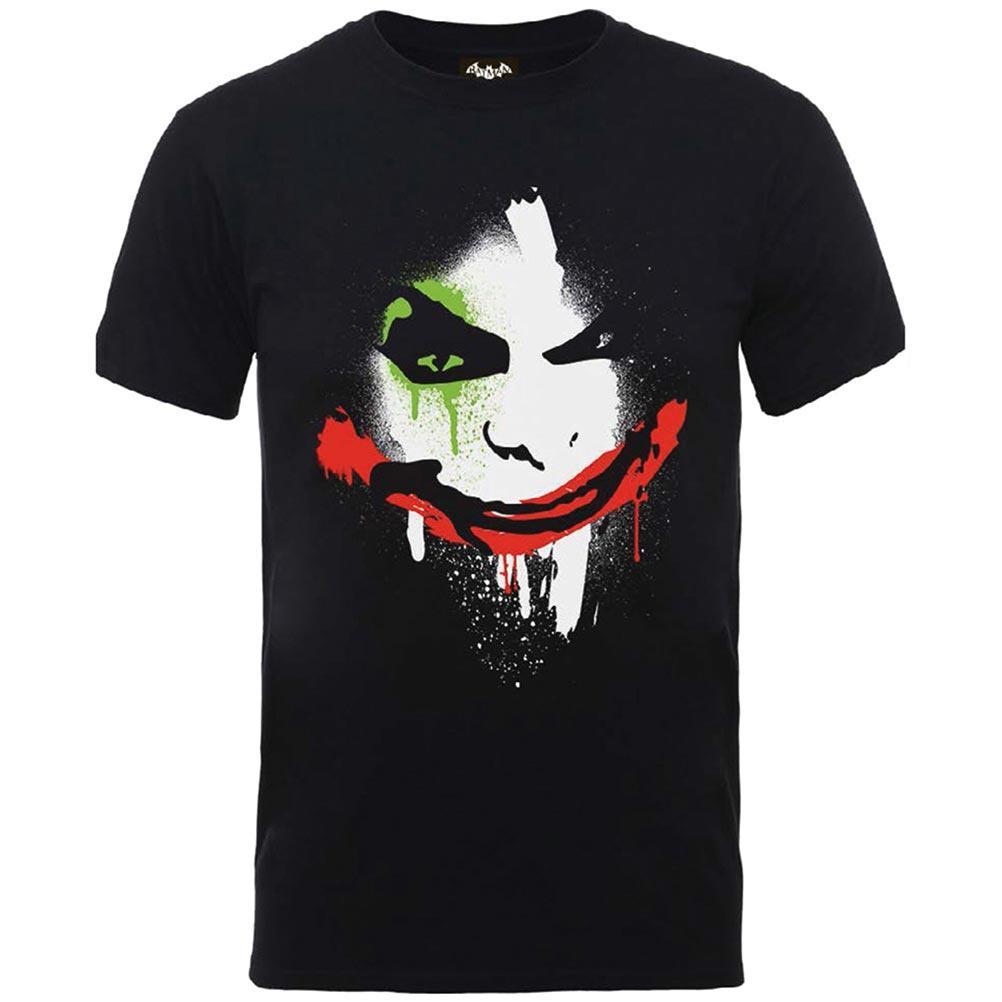 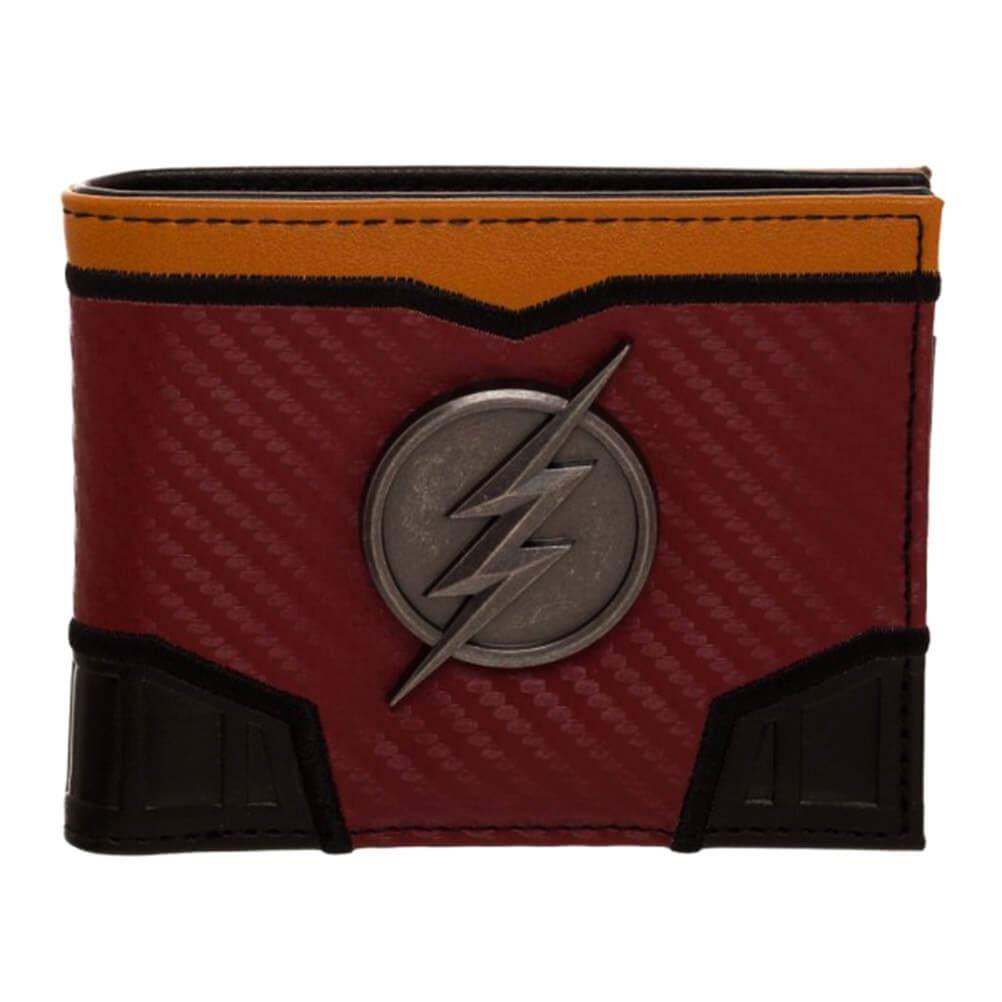 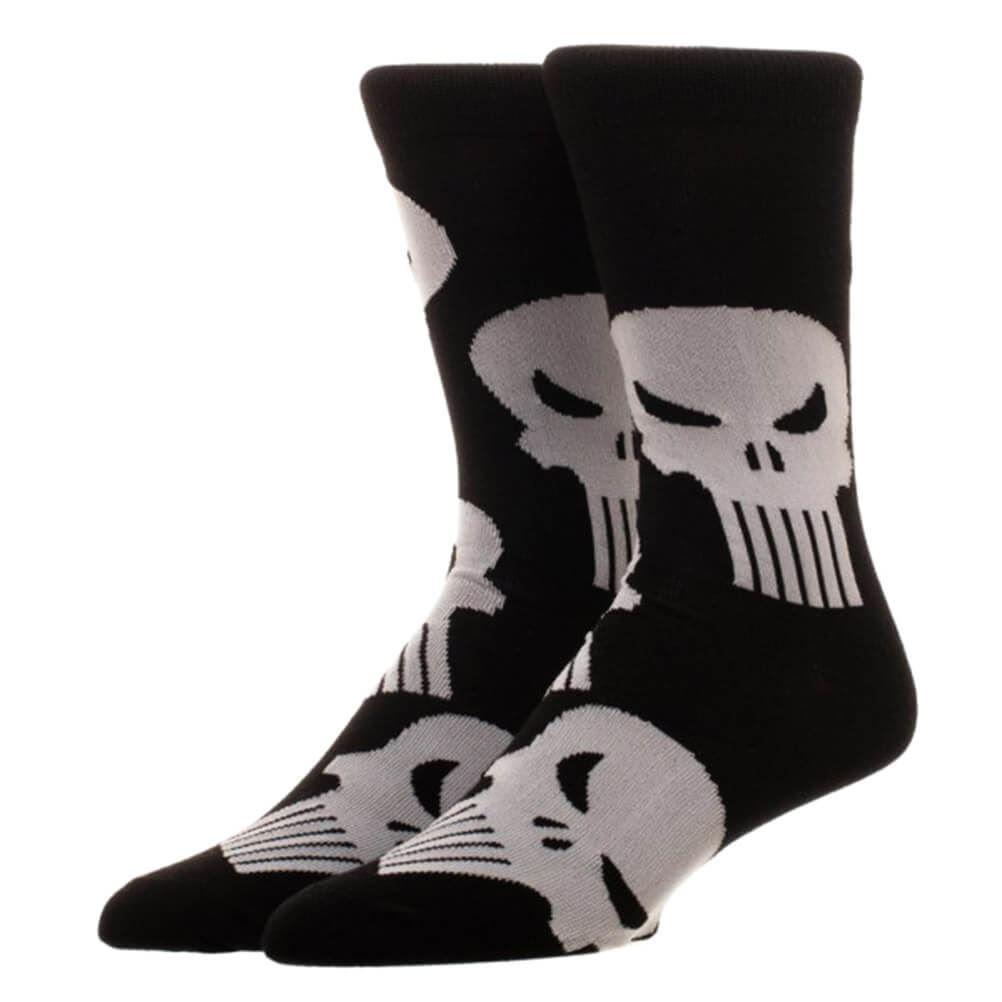 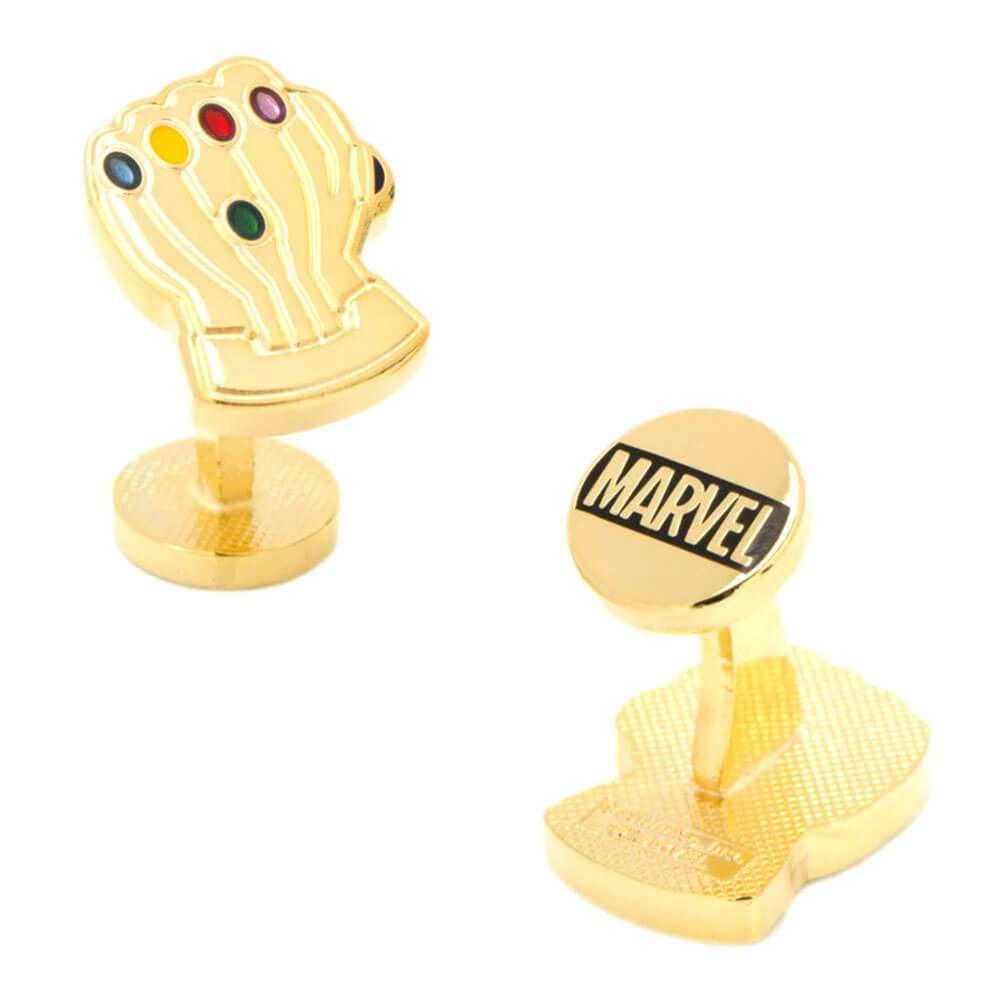 The Rise of Amazon Prime

In recent years, Amazon Prime have increased their production output and have progressively been a worthy contender for Netflix. In the digital age, streaming platforms have become more popular than traditional paid services and classic television broadcasting, meaning, competition is rife (over 15 million Brits are now subscribers). Amazon and Netflix are undoubtedly the most popular of the bunch but with Disney’s version, Disney Plus dropping later this year, it may start to become difficult to choose from among these entertainment behemoths.

Along with The Boys, Amazon boasts a range of awesome exclusives including: Justified, Good Omens, Lost, American Gods, Catastrophe, The Night Manager, Forever, New Girl, The Walking Dead, The Americans, The Good Wife, Parks and Recreation and the fervently anticipated Lord of the Rings series.

Disney on the other hand, recently acquired ownership of ESPN, ABC, Fox, Pixar, LucasFilm, FX and Marvel. This was quite a shock to movie fans, who have been rather vocal in voicing their concerns about the family friendly company holding sway over such a vast array of television and film properties. 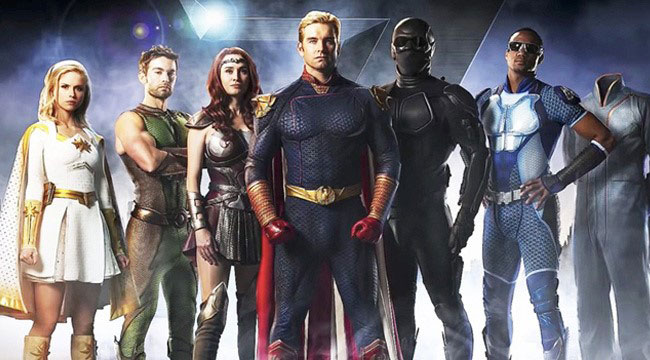 Early reception for The Boys is overwhelmingly positive, with a Rotten Tomatoes approval rating of 76% based on forty-nine reviews and a whopping 9.2/10 on IMDB. Praises for the cast resonate from most critics, who recognise the show’s broad appeal to members of the none superhero-worshipping community.

John-Michael Bond of Paste Magazine was particular struck by the show’s delicate balancing act between immersive violence and the more sensitive themes contained within, stating: ‘Yes, it’s crass as hell and one of the most violent shows on TV right now. 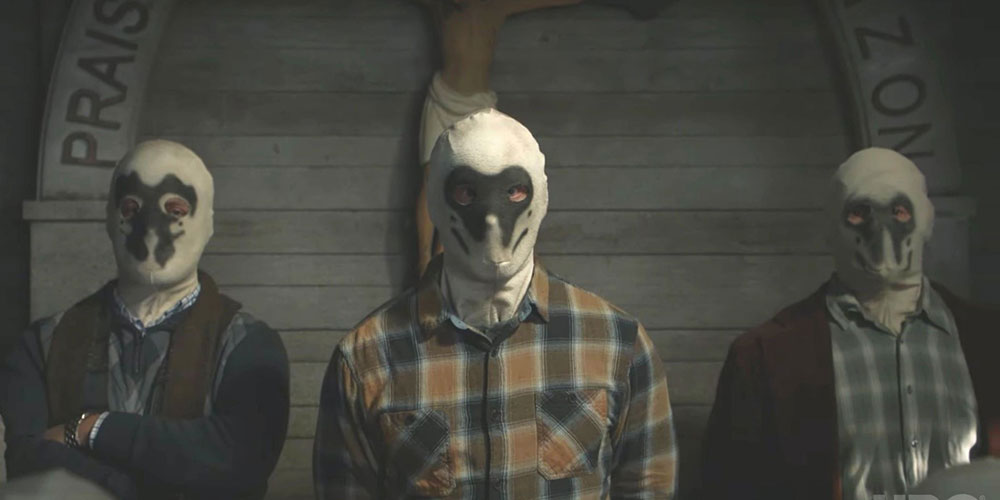 But deep down, when you push past the gore, sex, and horrors committed to screen, the thing that sticks with you is the show’s emotional core.’ Elizabeth Shue’s performance as the shady vice-president of Vought International is considered a highlight of the show as well as Karl Urban’s Billy Butcher (despite his apparent shoddy attempt at a British accent).

The Darker Side of Comic Books

The Boys is just the latest entry in a systematic rise of R-Rated comic book adaptations, which, have been gracing our screens for quite a few years now. It would seem that this darker side to the clean-cut superhero universe is only a logical progression, now that this extremely popular subgenre of films has infiltrated every section of our cultural conscious.

Christopher Nolan’s Dark Knight Trilogy is a good example of how supervillains can be genuinely terrifying (Heath Leger’s Joker being a standout performance) but, with their very conservative guidance ratings, a touch of the family values still permeates out. Now, there are A LOT of violent comic books out there and we have been treated to some interesting adaptions.

Some standouts are The Punisher, 30 Days of Night, Kingsman, Kick-Ass, Blade, 300, Watchmen, Dredd, Sin City and of course, everybody’s favourite foul-mouthed miscreant, Deadpool. Watchmen in particular, has a touch of The Boys’ tone to it and has also been treated to an upcoming television series on HBO. 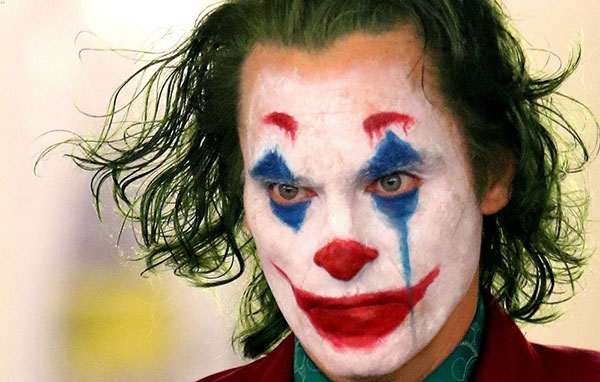 Also, we are being treated to yet another film featuring Batman’s arch-nemesis, The Joker, in Todd Phillip’s Joker later this year (also R-Rated), this time played by the brilliant Joaquin Phoenix. With so many family-oriented superhero films being churned out with increasing rapidity, it feels safe to assume that there will always be a market for deconstructed alternatives that are geared towards adults.

The superhero landscape is evolving to suit a wider range of demographics and it does not look like it is losing any steam.

DC Comics has a reputation for producing darker material than its major competitor Marvel, but it hasn’t had quite the same impact or success at the box office. Despite this, a host of new adaptations are set to grace our screens in the next few years including the aforementioned Joker, The Flash, Green Lantern Corps, Justice League Dark, Batgirl, Birds of Prey, Cyborg, Wonder Woman 1984, The Batman, Suicide Squad 2, Nightwing, Deathstroke, Black Adam, Lobo, New Gods and Gotham City Sirens.

Others are rumoured, such as, a standalone film featuring Jared Leto’s Joker and Margot Robbie’s Harley Quinn. It is clear that DC is attempting to challenge the massive creative output of Marvel studios and this bitter rivalry may only prove to serve as profitable for fans (even if they ultimately prove to be less commercially successful).

There’s no doubt that source material for these projects isn’t widely available, but what may prove to be the deciding factor in the success of these films is good scripts, good directors and less studio meddling. 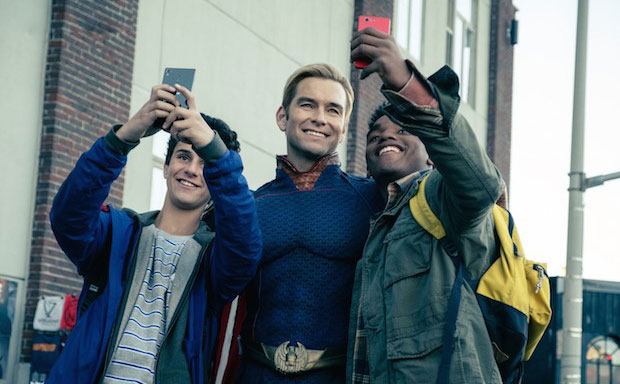 So, there you have it, the current superhero landscape in all of its grizzly detail. The Boys certainly sounds interesting, with a premise that should appeal to those that have been suffering from superhero disenchantment in recent years, as well as, superhero fans more generally. In the vein of Frank Miller, The Boys promises to portray a darker imagining of the canon and cater to the blacker side of our collective humour.

The show is available to stream on Amazon Prime Video NOW, so why not get a few episodes under your belt this week and let us know your verdict? As always, leave us a comment below with your answers. Also, why not tell us what other superhero properties you are looking forward to viewing? What is your favourite R-Rated (18) adaptation? Does Deadpool reign supreme, or maybe you have a fondness for Logan?

Is the market being oversaturated with all of these properties? Personally, this writer was a huge fan of Sin City (However, the sequel was undeniably a step down), 300 and is excited for a reimagining of Blade.