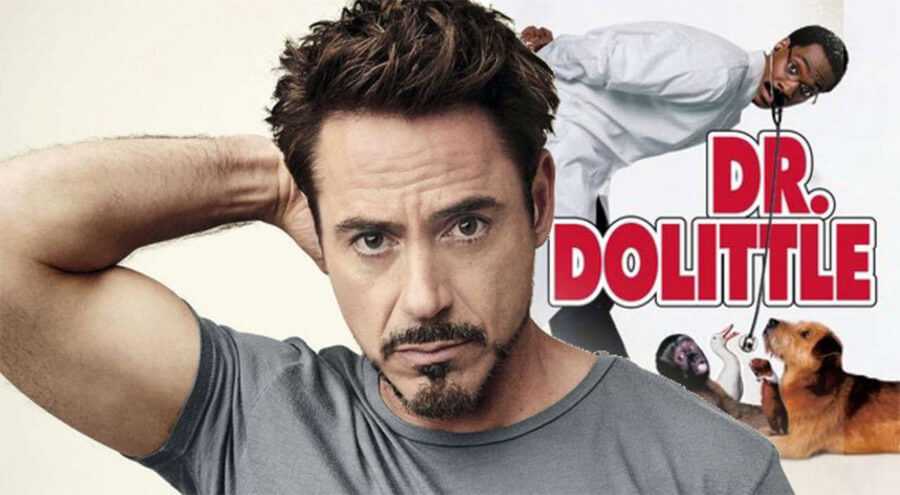 Dr. Dolittle is back in 2020 and if the trailer for Universal’s re-boot of this fun story is anything to go by, fans are in for a fantastic film! Some were sceptical when another remake was announced but having watched the trailer, I think you’ll agree that it’s more than enough to get viewers excited. The film was originally given the title ‘The Voyage of Doctor Dolittle’, but it has recently been changed to simply, ‘Dolittle’.

Robert Downey Jr. plays Dr. Dolittle who has lost his wife seven years earlier and become reclusive, hiding away in Dolittle Manor with only his animal companions to talk to. Robert Downey Jr. is joined by a star-studded cast including Rami Malek who played Freddie Mercury in Bohemian Rhapsody and Tom Holland from Spider-Man Far From Home!

The Eddie Murphy version of the film which was released in 1998 is what most fans will recognise the Dr. Dolittle name from, the movie was inspired by a series of books of the same name, although no material from the children’s stories are used in the film, the only real resemblance is the name and the fact that the Doctor can speak to animals. In 1967 a musical version of the first novel was produced which had much more of a connection – it was a flop in the box office but won two academy awards and is still a cult classic.

At one point in the 1998 movie, Eddie Murphy is actually watching the 1967 version on TV! The 1998 version has an IMDb rating of 5.4 out of 10 stars, not exactly a hit but it certainly has its fans and was enough of a success to warrant a ‘Dr. Dolittle 2’, ‘Dr. Dolittle 3’, ‘Dr. Dolittle: Tail To The Chief’ and ‘Dr. Dolittle Million Dollar Mutts’.

You would assume that Eddie Murphy was a big animal lover in real life, however the actor is actually terrified of live animals! He avoided acting in the same room as the animals whenever possible and many of the animals were superimposed digitally in scenes. When Murphy was acting in the same room as animals, the shots often ended with him screaming!

Due to the large variety of animals in the film, months of planning and patient training were required to prepare for filming. Trainers use natural training methods that involve studying the behavioural characteristics of each species and the unique traits and temperament of each individual animal. The animals were trained to respond to voice, sound and hand commands and were rewarded with their favourite foods.

Special equipment such as unique harnesses, were designed to create some of the illusions. One of these was fashioned for the dog that appears to be dragged by the collar into the vet's office. This harness was created to distribute the dog's weight between the area at the back of his neck and his hind area as he was pulled in a seated position. The dog was conditioned to this action and equipment in pre-production. Another special harness was developed Lucky to safely ride in the passenger seat of the car.

The film is set for a February release and also stars Antonio Banderas, Michael Sheen and Oscar winner Jim Broadbent. Voice performances from Oscar winner Marion Cotillard, Frances de la Tour, Carmen Ejogo, Ralph Fiennes, Selena Gomez, Tom Holland, and Craig Robinson make this a movie with more than its fair share of big names attached! Check out the trailer below and let us know what you think of Dolittle!